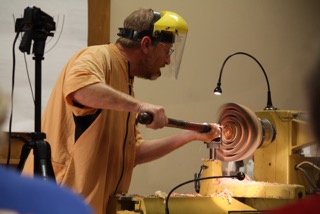 We not only had a great June presentation by a Hawaiian, but enjoyed a sweet treat—chocolate covered macadamia nuts. Andy Cole presented a natural edge bowl coring demonstration using a Hawaiian mahogany bowl blank. This is also called a side grain coring technique. Andy prefers using the Kelton-McNaughton coring system because of the versatility that the various curved shapes and blade lengths provided to the turner. He acknowledges that there are easier to use coring systems available to the wood turner, but they constrict the turner to certain static shapes. The McNaughton system adds versatility not only with the shape of the bowl, but also the depth of the cored blank, something that is not available with the other commercially available coring systems.

Before even beginning to core, Andy saturates the bark surface with CA glue. Once the outside is rough shaped, he saturates the exposed bowl natural edge with CA glue. In the event that you lose a piece of the bark and you cannot find it in your kneedeep pile of shavings use the bark from the chain sawn corners to make a repair. Hence, it is always good to keep the chain sawn off cuts until you have finished turning all of your cored bowl blanks. Once the outside shape is established, turn as large a tenon on the bottom as you have the capacity to hold. There is a lot of stress produced on your blank while coring and it is very easy to snap the tenon right off the chuck if it is too small. Once the outside shape is reestablished reapply CA glue along the ark line. Set the straight.

cutter such that the cutting tip is at the exact center line of the blank. Start coring with the straight cutter to about 2-2 ½” on the outermost bowl leaving the appropriate thickness for either a once or twice turned bowl. Widen the kerf a little to prevent binding as you make your initial cut. Move over to next largest bowl to be and cut the kerf the same way. Continue down to the smallest possible bowl you think possible, but remember to shift to the next smaller cutter after the second blank is established.

After defining the bowls, switched to the appropriate curved cutter. Hold the blade on the outside of the blank and determine the best blade for the curve you want. Start on the outermost bowl and then the second outermost, cutting down the curve, but not cutting all the way. Shift to the next most appropriate curved blade and continue coring down to the last bowl coring to the very bottom and releasing the blank. Continue outward with the next innermost bowl and releasing all the blanks that you previously defined. If during the coring process your blade keeps grabbing, it is recommended that you lubricate the cutter with Howard’s Feed ‘n Wax available from your local big box store. Once all the inner bowls have been released, reverse chuck the bowl and turn a tenon compatible with your chuck jaws. Finish turning your bowls if you are going to completion or date and store the bowl blanks if you are going wait until they have stopped losing moisture.