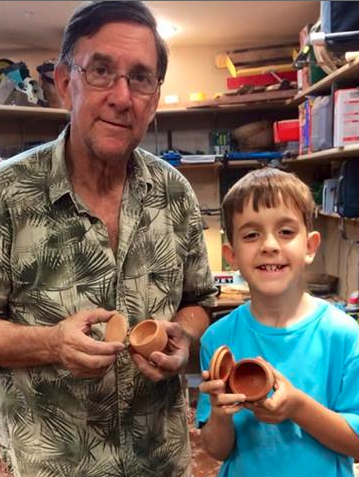 Wood turning can be many things to many people. Not very many of us make a full time living from it; some want to make a little to augment another income source. Others of us will be happy if we can just make enough to buy our next tool. Those who do not sell, soon run into the problem of shelf space in the house. But all can give wood turned items as gifts: Wedding, Birthday, Housewarming, Christmas, Anniversary, Welcome to the Neighborhood, Going Away, Welcome Home, Thanks for the Dinner Invite, or numerous other reasons. Giving gifts that you would otherwise have spent money to purchase may have the same net cost financially, but in my experience, the receivers value your hand made gift more highly than anything you would have gotten them from a department store. The Holiday Season is just around the corner so it is a great time to make things to give as well as to sell so others too can give handmade gifts. Making things by hand is getting rarer in our high tech world; and the rarer things are, the more valuable in people’s minds. Luelle and I were recently in Ireland and had a meal with Liam and Cathy O’Neill. You may have seen the article last year about his “Peace Bowl.” It was a turned, wooden bowl like most of us make but, it was from a special tree from the site of the Battle of the Boyne in Northern Ireland. The giving of the gift was instrumental in the peace process that we observed on our recent trip. Here’s how one internet author described it:

…his Peace Bowl played a central role in the Northern Ireland peace negotiations at St. Andrews, Scotland, in 2006. Here’s how it happened.

All the main players in the peace negotiations were present at St Andrews. The British Prime Minister Tony Blair, the Taoiseach (similar to Prime Minister) of the Irish Republic Bertie Ahern, Dr Ian Paisley leader of the Ulster Loyalists and Gerry Adams, who, as president of Sinn Fein, represented the Nationalist Republican people of Ulster.

It was make or break time. Dr Paisley’s Democratic Unionist Party (DUP) and the Sinn Fein republicans had become the two biggest players in Northern Ireland. For two days the parties struggled to come to an agreement that all sides could sign up to, but on the evening of the second day a sense of gloom descended as the parties struggled to come to terms with each other. Dr Paisley and his wife were anxious to get home to Ballymena to celebrate their 50th wedding anniversary and were also worried about what kind of reception they would get in Belfast if they signed up to a deal. Sinn Fein were behaving as if there was not going to be a deal and were trying to ensure that it was the DUP who walked out first and caused failure.

All assembled for the plenary session, fearful that they had reached a dead end. Those who were present testified to what happened next. The Taoisech, bowl in hand, strode across the floor to Dr. Paisley. Saying that he understood it was the Paisleys’ 50th wedding anniversary, Ahern said he had a gift from the government of the Irish Republic in honor of the occasion.

Visibly moved, Paisley announced to the whole room, “Mr Ahern has just explained to me that this vessel is made of Walnut from the site of the battle of the Boyne. Today this bowl has come home. We have been working hard for three days and I think we have seen the first sign of a new light. I hope that this light shines not just on those in this room, but also on our children and grandchildren.”

By giving a gift which was so firmly connected to the battle site which is so central to Northern Protestant culture, Bertie Ahern was making a statement on behalf of the Irish Nation. “The Orange tradition has nothing to fear from the South. We are not trying to denigrate your culture, in fact we recognise your right to celebrate it.” The visibly moved Paisley was key to the success of the St. Andrews talks. (“Did You Know…”, from http://www.iaci-usa.org/images/irish_facts_9-13.pdf)

So, giving gifts made of turned wood has a powerful history. Maybe your gift will not bring two warring factions together—but maybe it might. It has happened before. In any event, your hand crafted gift will be remembered more than anything you could buy them, and just think—with all that money that you do not spend at the department store, you can afford your next gouge!