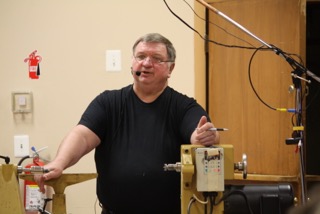 As we seem to have missed Winter and head into Spring in February my snow thrower sits forlorn in my garage. However, I have wood to turn rather than snow to throw, and that’s a good thing. For some reason my mind “turned” to thoughts about a simple but important thing: drive centers. Like lathes, ask 10 woodturners to name a “best” lathe and you get 11 answers, so also with drive centers. Of course a “favorite” drive center may depend, among other things, on the wood being held: soft and punky, hard and dry, etc.

Four prong, two prong, no prong, multi-prong? Under many circumstance a drive center has an advantage over a faceplate. I didn’t really know that when I started turning and I ended up buying several face plates. Now they gather dust, for the most part. I also have acquired several drive centers, and I have favorite ones for different turning projects. To me, the biggest advantage of using a drive center is that I can change the orientation of a piece to capture (or avoid) a characteristic of the blank. For bowl blanks or hollow forms, for instance, once you turn away the bark and see the character of the blank, repositioning at the headstock or tailstock, even slightly, can reveal, or avoid, figure or other “features” inherent in the blank itself. With a faceplate, once oriented on the headstock it is pretty much impossible to change the geometry of the blank…you inadvertently made the choice about orientation when you mounted the faceplate, a time at which you didn’t yet know much about the character of the blank inside the bark-shrouded block. This is also a usual shortcoming when using a screw chuck. So drive centers can have advantages over a fixed faceplate or screw chuck.

My personal favorite for bowl blanks is a drive center that screws directly onto the headstock spindle, has four prongs and a center point, all of which can be removed for sharpening, or they can be adjusted so that they are lengthened, or shortened. Although I haven’t had to sharpen the prongs yet, the fact that I can remove them for sharpening is a blessing. I bought this center from Bill Rubenstein (Stubby Lathes USA) a couple of years ago when Stubby USA was still selling lathes, since out of business. I have tried to find the drive center online, but without success. This is another characteristic of tools for woodturners: the manufacturer, or a particular item, may only be around for a short period of time.

My personal second favorite is the Oneway Safe Drive center. Alan Lacer, when he was here a year or so ago, advocated using a Dremel tool or file to make a few grooves around the circumference of the drive. The idea is to provide a bit of a “bite”. I haven’t done that and I find that it works just fine. Also, the spring can be removed (or the point itself). Again, to each his/her own. So you can buy, make, or modify drive centers to suit.