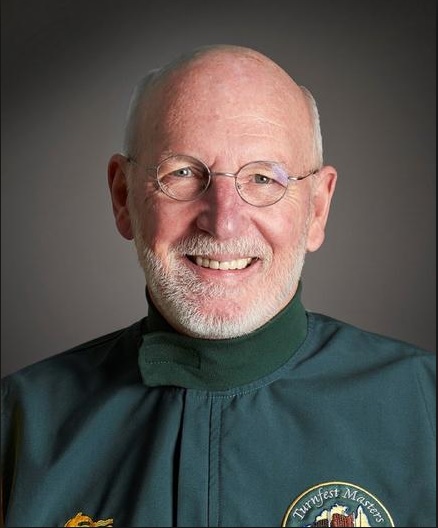 Tom Wirsing was born in Roanoke, Virginia, in the Shenandoah Valley, an historic center of American furniture building and woodturning. Tom’s dad was an expert on American period furniture and had a well-equipped workshop which included a lathe. Tom began turning wood as a young boy. After graduating from Roanoke College with a degree in Physics, Tom began traveling extensively. He lived and worked in Europe, Asia, and nine US States. The lathe in his dad’s workshop became distant memory. About 20 years ago Tom found himself working for the Hewlett -Packard Company in Chicago and living in a house with a spacious basement. He bought a lathe and began turning wood again. At first he made mostly furniture but, almost by chance, he attended a demonstration by Richard Raffan, a well-known Australian wood turner. Richard took a rough piece of American black cherry timber and turned it into a wonderful bowl. Tom was hooked. Thus began Tom’s interest in creating art pieces on the lathe. He now turns primarily platters and bowls from a variety of woods. His favorite wood is figured maple.

Tom is a member of the American Association of Woodturners (AAW), a non-profit organization of wood turners which has 15,000 members worldwide. Tom served two terms as president of the AAW. He also served two terms as president of the Front Range Woodturners in Denver. For more information on the AAW visit www.woodturner.org. Tom has demonstrated at the AAW Symposium, the Utah Woodturning Symposium, the Rocky Mountain Woodturning Symposium, Turnfest in Australia, as well as many AAW chapters across the USA and Canada. In addition to turning wood, Tom enjoys building furniture. He has built tables, beds, chests of drawers, cabinets and a variety of other furniture. Tom is an avid traveler. He has visited all 50 US states, around 70 countries and all seven of the world’s continents. Tom resides with his wife Melinda on a ranch in north Boulder County, in the foothills of the Colorado Rocky Mountains, where he grazes Angus cattle, builds furniture, and turns wood.